“Oh little town of Bethlehem” goes the famous hymn. In fact, Bethlehem became kind of a mythological place. After all the nativity plays, songs, stories, images and scenic Christmas cards, people tend to imagine a tiny place with a few camels and huts and shepherds on their fields and a shed where Jesus was born after all. After my years of playing the Angel of Annunciation in our own nativity play (with such passion that I still remember the lines), I literally see the fields in front of me. And I mean, yeah, at that time, it was that kind of place with less than 1.000 inhabitants. 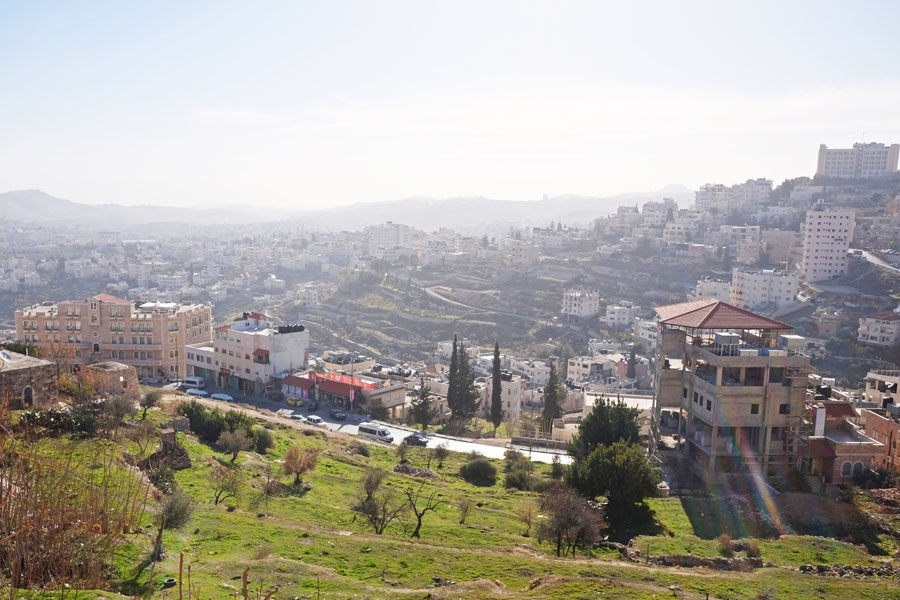 Today, take this number times 30 and think of it as a full grown city. Heaps of houses, narrow cobbled and paved streets, shops, cars. Heaps of snap-addicted tourists running over each other’s feet in the attempt to keep up with their guides. An added bonus are the Banksy graffitis at different places in town (you’ll need to check where to find them though, they’re not easy to just stumble upon).

And consider it belongs to the Palestinian territories. Meaning, between Jerusalem and Bethlehem lie just a couple of kilometers. And a really big wall. There’s no just walking in there. It’s weird, really. Especially being German, just having missed the reunification by a couple of years but still having grown up with its after effects and having my own history in mind… 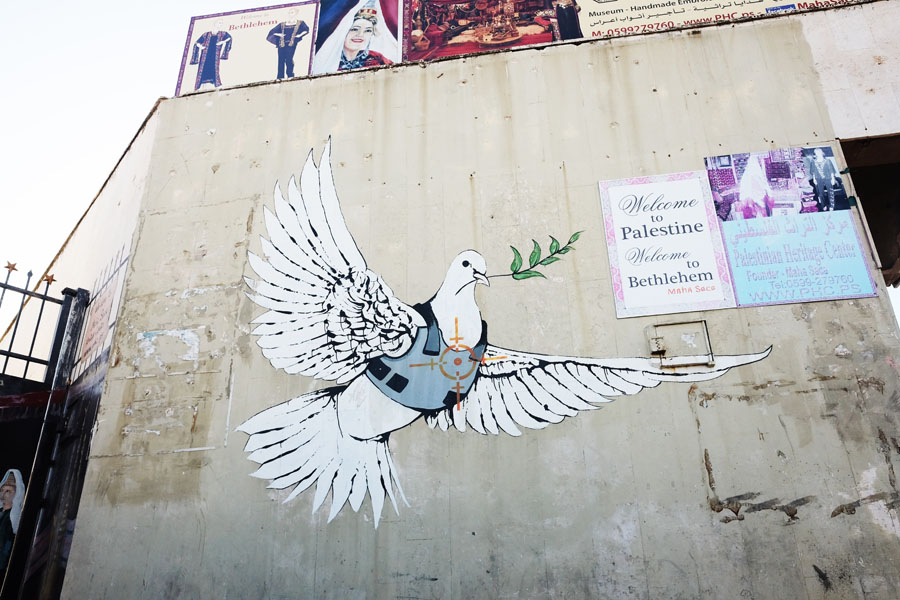 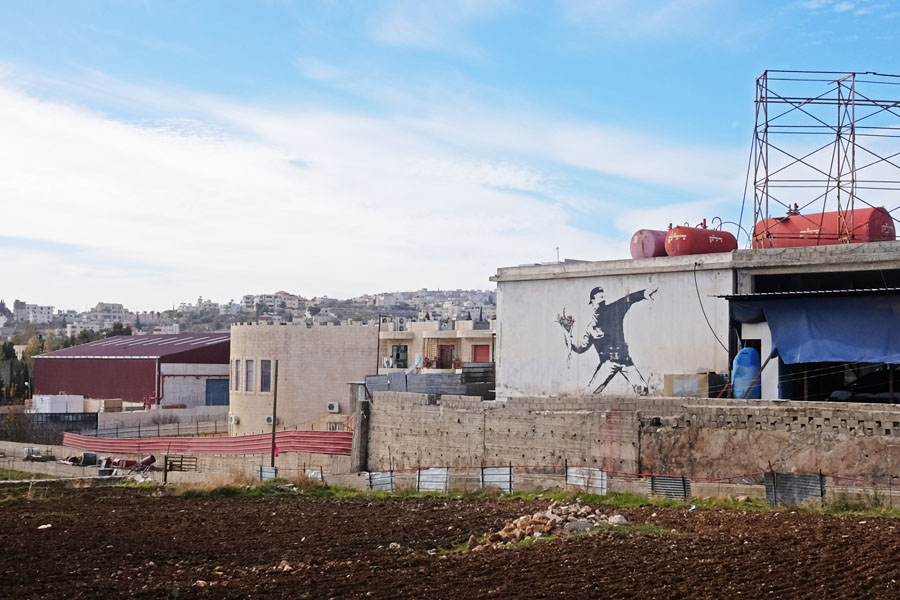 But this is not going to be a political post. Its simply a fact having a big impact on Bethlehem, as it has no space to expand at all and the barrier is causing economical recession and increasing number of families forced to leave.

Although the whole situation is known to be complicated, tourists are able to enter the territories relatively easily. The biggest part of which is the West Bank, including Bethlehem, and the Gaza Strip. To enter, you will have to cross an Israeli checkpoint, and while tourists are free to travel back and forth, have your passport ready for reentering Israel.

Just before the checkpoint, the street will lead you past dubious glaring red signs warning Israeli citizens of life danger if they’re entering Palestine. And then there is this gigantic 8m high concrete wall, complete with barbed wire, watch towers, cameras and armed soldiers. But same as in Berlin, the wall is covered in plenty different colorful graffitis. Saying “Hugs and kisses, nothing lasts forever” and “Make hummus, not walls“. Oh, I agree! 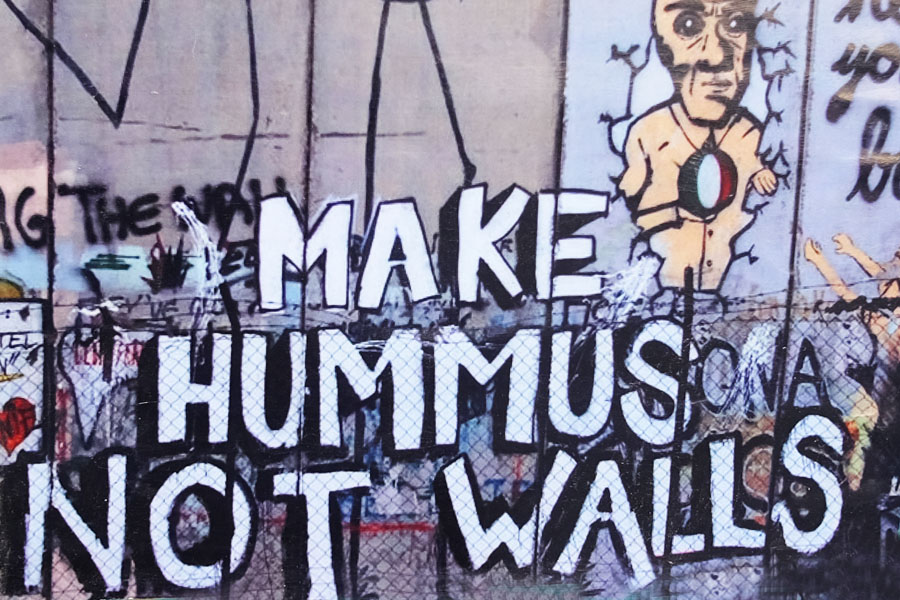 So, my group of five other travels of various nationalities and ages and I left our Israeli cabs (who had to drop us of before the border), passed the gates, and were picked up by our Palestinian guide.

Bethlehem is part of an area called the Jerusalem Mountains, and thus you’ll notice the further you get towards the center, the higher the streets you have to climb. At some points they actually get so steep that I don’t know how any car could get up there without rolling backwards, and then at the same time so narrow that there are just millimeters between the vehicle and walls or people or market stalls.

Today, Bethlehem welcomes most of its visitors in the holiday season. However, sadly, it’s mainly been commercialized. I could still observe Santa figures on window sills, a huge decorated Christmas tree on Manger Square (which is the city centre), as well as several blinking plastic trees in various side streets. And yet, the history that has taken place here, whether one believes in it or not, is almost tangible… 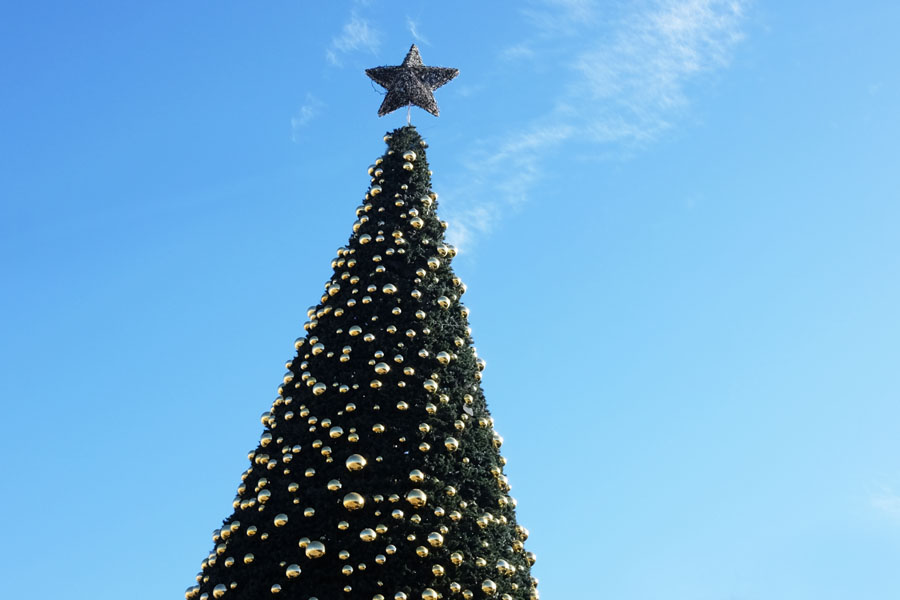 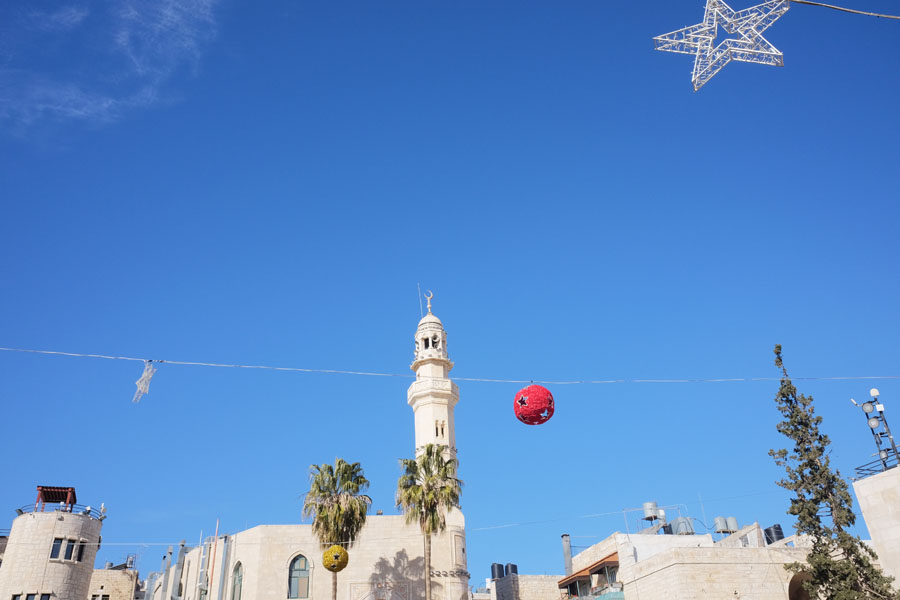 Most of the holy sites are today covered by churches, and even if you’re not religious, there is plenty to see and do. It’s world history you’re seeing here after all, and also from an archaeological point of view, Bethlehem is extremely interesting. Then, there is the lively old city with shops and bazaar, local art and performances to check out, opportunities for political education, as well as places to visit around town like the impressive Herodium.

Narrow limestone streets lead you past exotic shopfronts and still do make you feel like in a different age, especially Star Street, believed to be the way that Mary and Joseph were going to the Nativity Grotto. 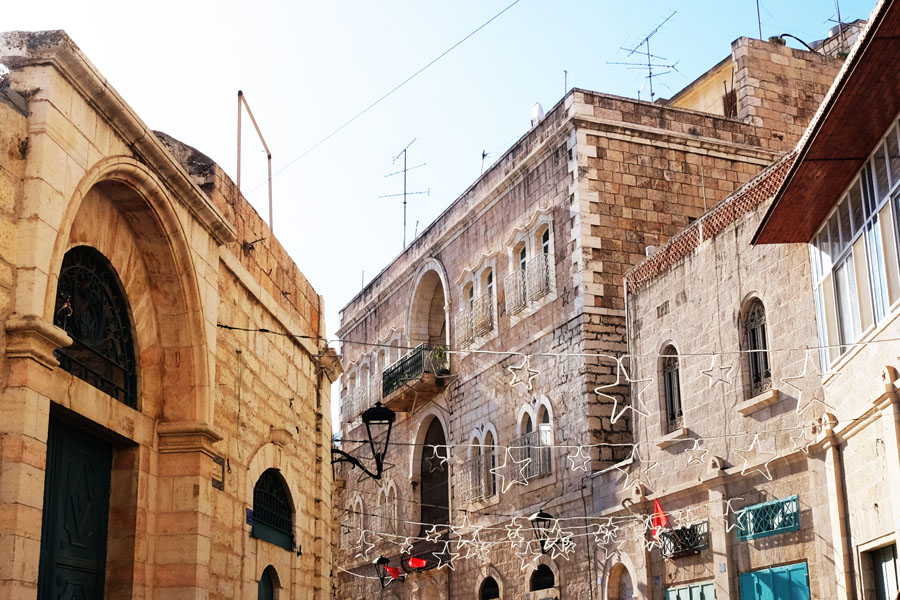 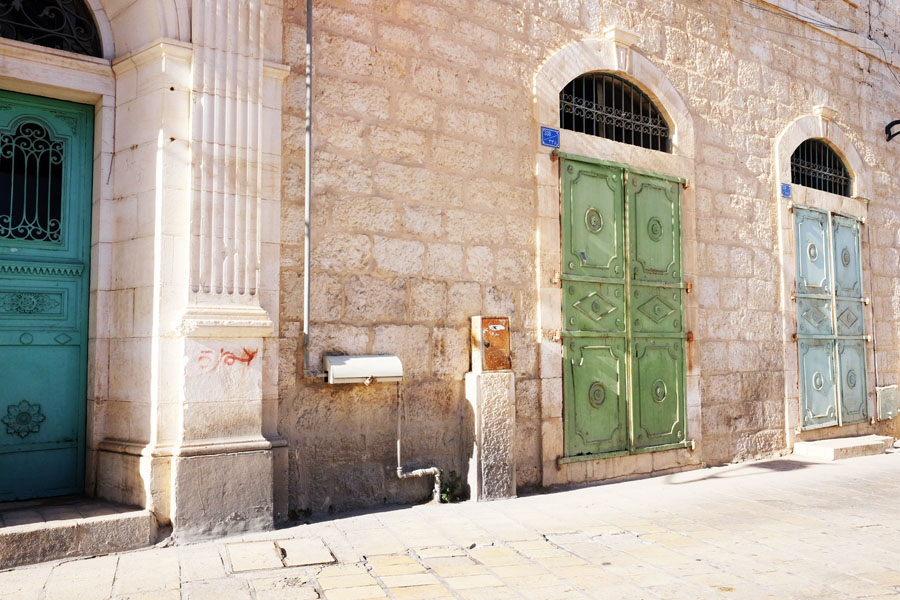 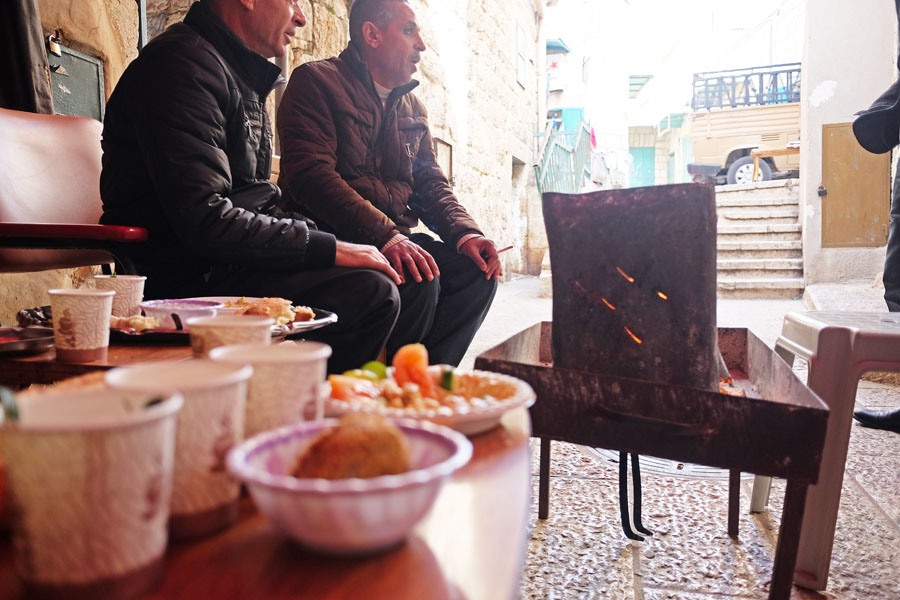 The Church of the Nativity

First of all: In case you came to Bethlehem by yourself, you might wanna consider to get a tour guide (around 50 NIS per hour) to tell you about all the tiny details and backgrounds and possibly even introduce you to the priests

It is the oldest church in the world dating back to as far as 327 CE, commissioned by Emperor Constantine The Great. It represents a piece of history fought over by several groups. Resulting in having been split into 3 sections for the Greek Orthodox, Armenian Apostolic and Roman Catholic (known as “status quo”). For lanterns in the grotto for example, each clearly belongs to one of the three groups.

Despite the major construction work going on since 2013 (and being the first significant restoration ever), I found the Church, which is a UNESCO World Heritage Site, to be a truly impressive and beautiful place. The entry to the church is pretty unusual, as it rather reminds of a cave-like opening, and forces everyone entering to bow down. Originally, the entrance was much larger, but to prevent attackers from riding in, it was repeatedly reduced in size. 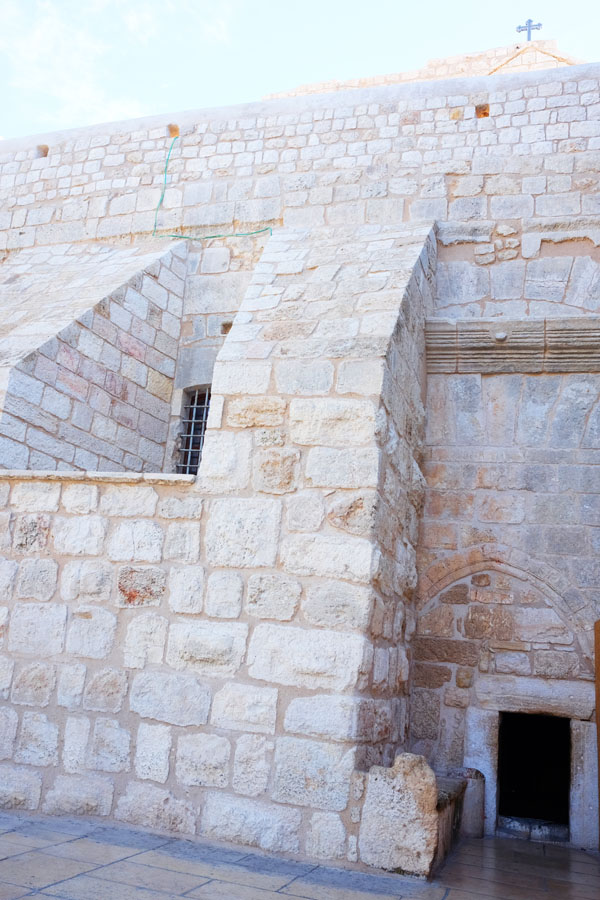 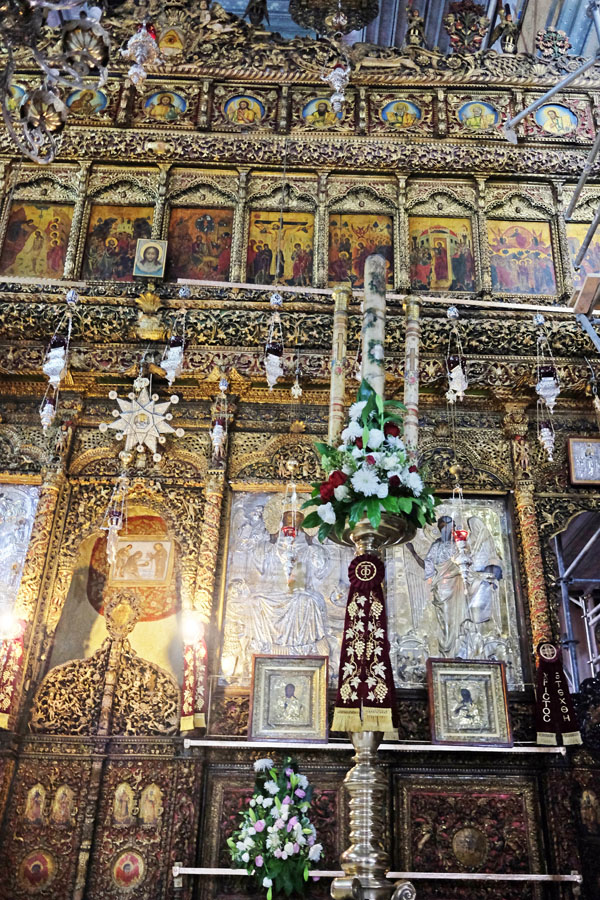 The church itself is pretty big and beautifully decorated. Only a month ago, the original mosaics on the walls were uncovered after long attempts of (successful) restoration – lucky us!

Then, our tour guide showed us Constantine’s original 4th-century mosaic floor that is still intact (rediscovered just in 1934), and led the way to the Grotto. 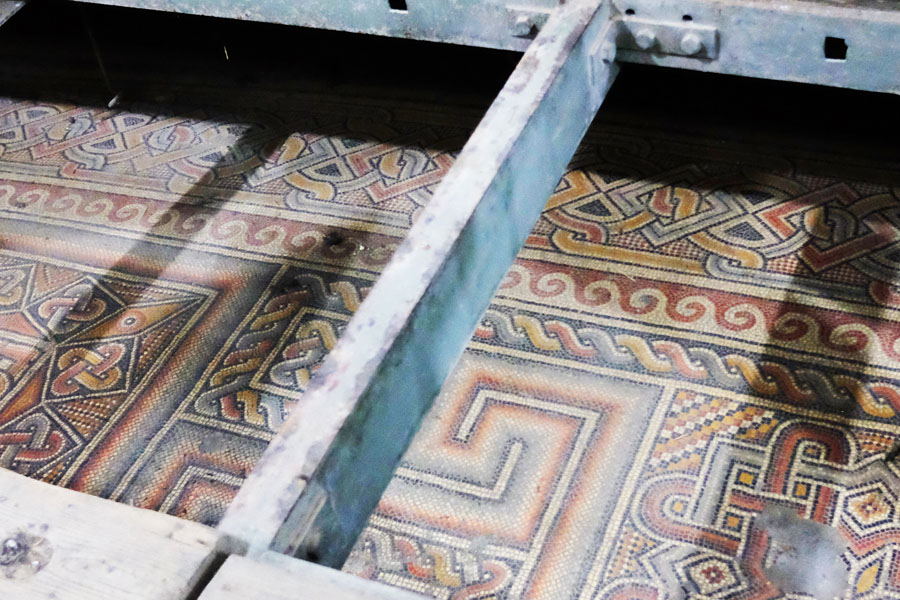 The Grotto of the Nativity

Did you know Jesus was born in a cave? Contrary to the popular image of a shed… Of course many sources argue, whether the star really does mark the spot, but it is nonetheless an imposing symbol for the birthplace of Jesus.

However, before entering you’ll be faced with the challenge of entering at all. I found January to be a good off season time to visit (although it’s rather cold), since otherwise you might be standing in line for up to an hour before entering the grotto at all. Try to focus on lunchtime midweek otherwise, which will ease the lines up a bit as well. 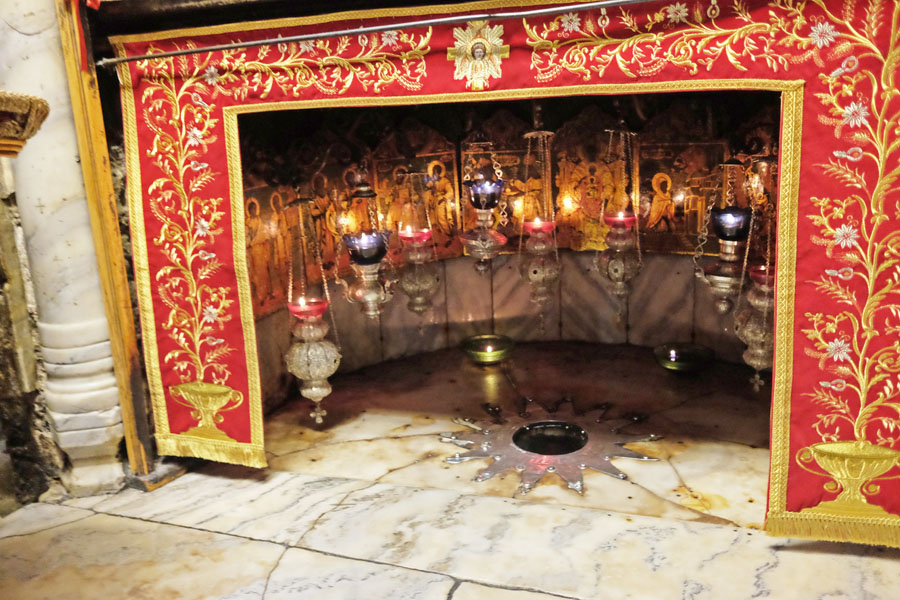 In awe to be finally there, we descended the stairs after just 10 minutes of waiting. Just lantern-lit, the room was warm, different scents were wafting through the small place, devout individuals were kissing the sacred site, with a 14-pointed silver star (for the 14 generations in the line of Jesus) marking the spot, showing a Latin inscription saying ‘Here of the Virgin Mary Jesus Christ was born’. Just opposite, there is also an altar dedicated to the wise men, as well a manger, from where the shepherds watched. A big moment, an electric atmosphere, I felt overwhelmed by the significance of this major religious and historical site, regardless of which religion it relates to.

Just next to the church, there is an archway leading to the Monastery, home to a couple of monks servicing the Armenian community of Bethlehem. Right there you’ll find a statue of Saint Jerome, who had translated the Bible to Latin in the late 4th Century (becoming the Catholic Church’s officially Latin version of the Bible later). To his feet there is a skull that we was believed to have been lying on his desk, to remind him of his mortality and the need of finishing his job (taking him 23 years).

Just a short walk from Manger Square, you’ll find the less known Milk Grotto Chapel. The cave inside is believed to have been a hiding and resting place for Mary, Joseph and their new-born son during their flight to Egypt. While Mary was breast-feeding her Child, a drop of milk is said to have touched the red rock, turning it white and chalky. In fact, this kind of stone is really unusual to find in the area, compared to the lime stone you normally see everywhere. If women swallow a bit of the powdery substance, it is said to enhance fertility and enable a mother to breast-feed. 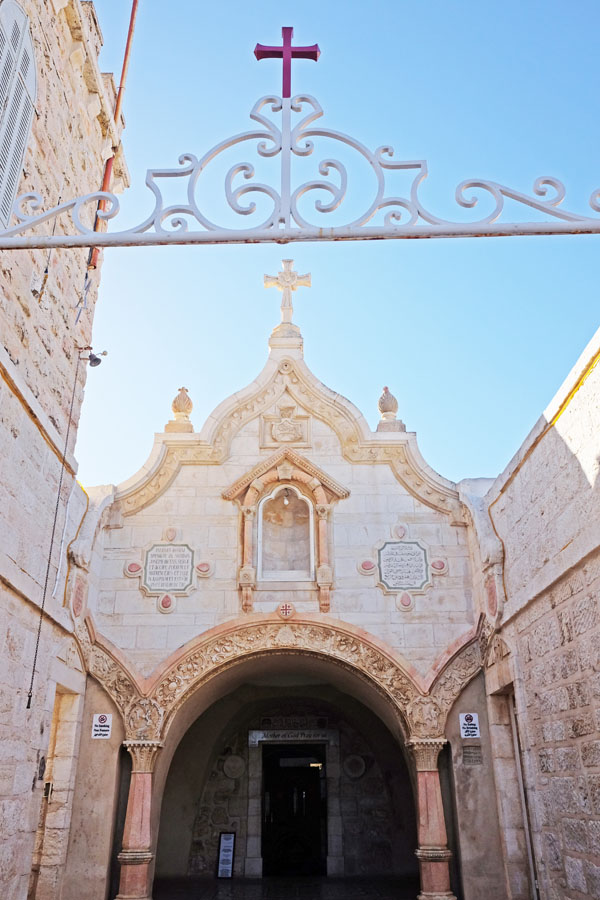 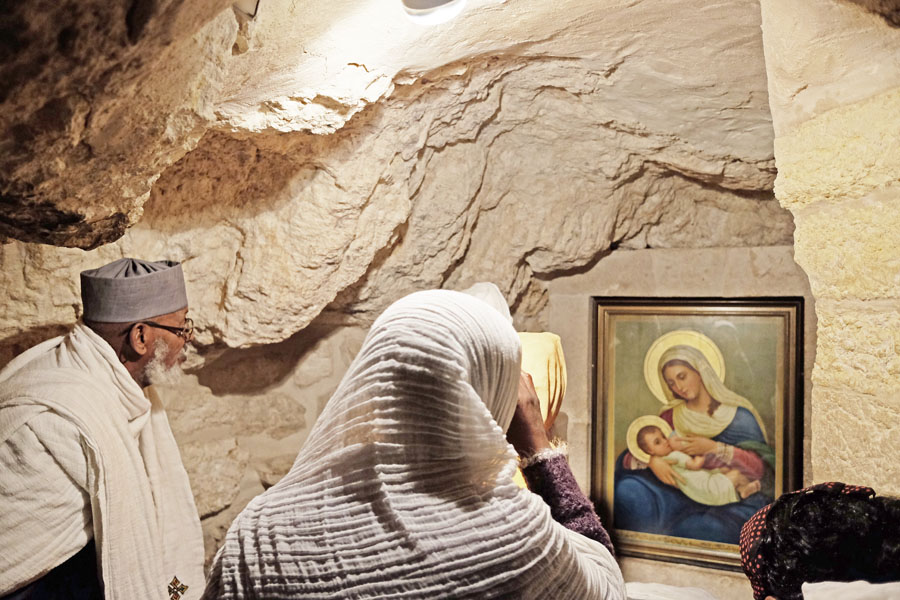 We felt very safe throughout our visit to Bethlehem and it presented itself as a very tourist friendly city. It was easy to get into and out of Bethlehem and the atmosphere was good during our visit. Obviously trouble does break out so it’s wise to follow the situation closely.

In total of course, the area has a lot more to offer, and the sites mentioned are those covered in a short half-day trip. See here for more places! 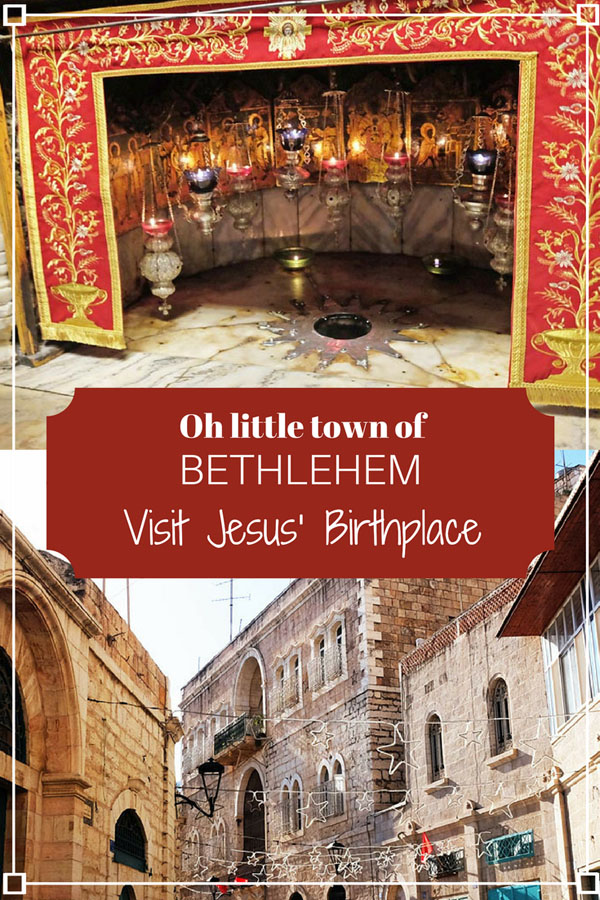 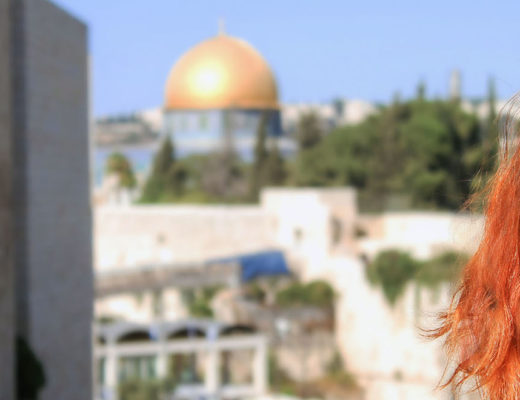 Things To Do in Jerusalem – Discover The Holy City