“If you could make a living on scenerey, Mayo would be the richest county in Ireland.”

A local saying so splendidly expressing what my sister and I came to be lucky enough to explore on a weekend’s trip. We had roamed Dublin for a few days already, and decided to take the scenic train ride to Ireland’s west coast. Well, and then a bus ride. With a lot of hair pin turns. And then a long, long walk. We might have packed a little lighter if we had expected the odyssey we went through until finally reaching our airbnb on Achill Island. 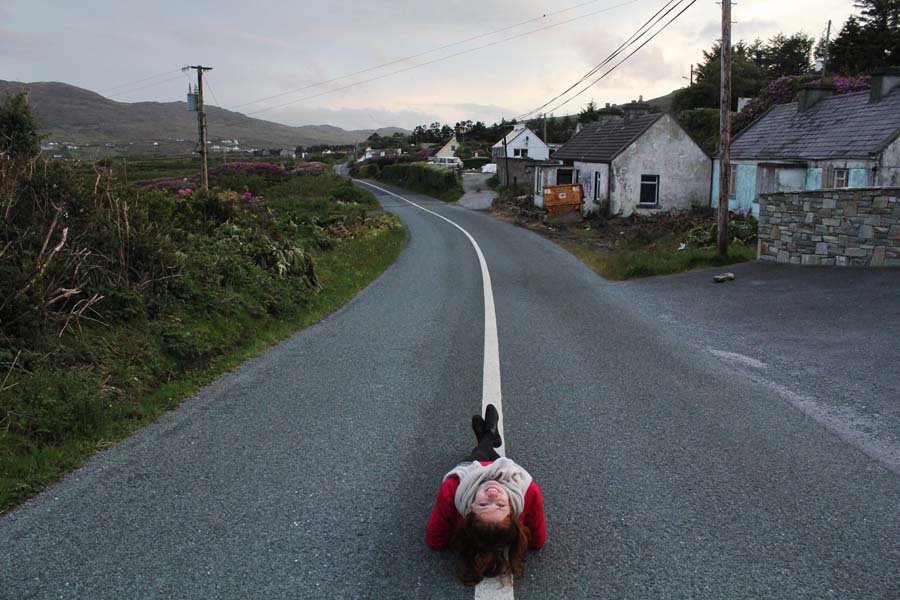 The Beauty And The Sea

I might not have seen a lot of Ireland during my short stay, but I would easily agree that this wealth in natural scenery is barely anywhere better observable than on Achill Island. Cliffy mountains, long stretches of plain peninsulas and secluded harbors along the way to Blacksod Bay in the north and Clew Bay in the southeast. Sure, Achill might be somewhat tucked away, but imagine how you would preserve your most valuable treasures – you wouldn’t just leave them on your doormat, but devote them a nice safe place. Since the 18th century, tourists were showing their interest in this hidden gem. The island’s harmonic composition of topographical features makes every click on that camera worthwhile (which will likely be the only sound you hear), and the long way forgotten immediately. Although it actually isn’t even a proper island since the 19th century, when a bridge was built to connect this island to the bigger “green island”. 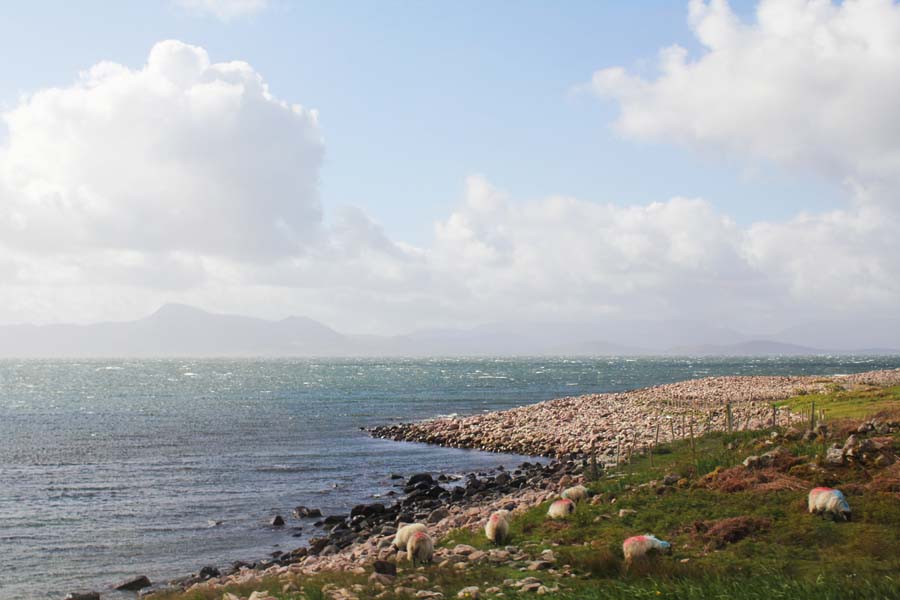 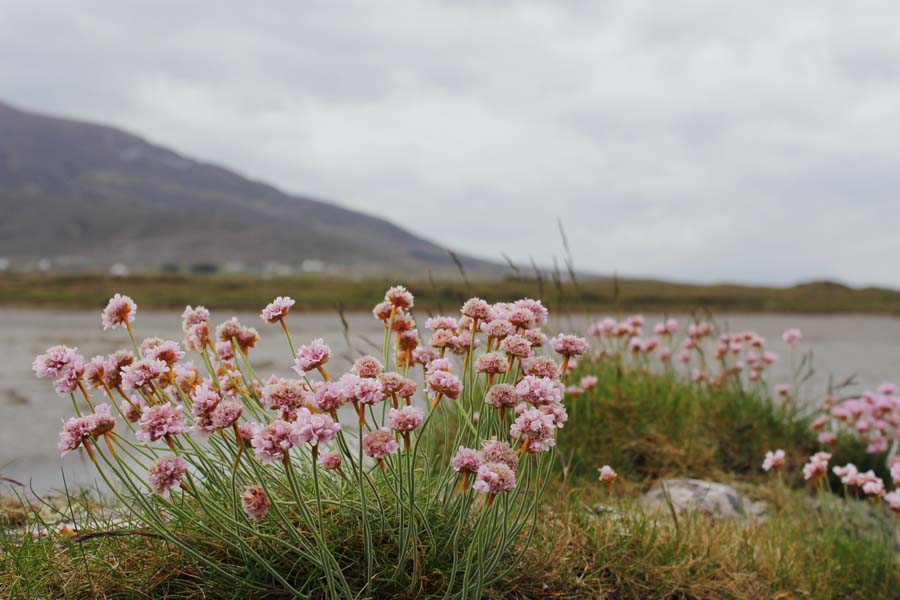 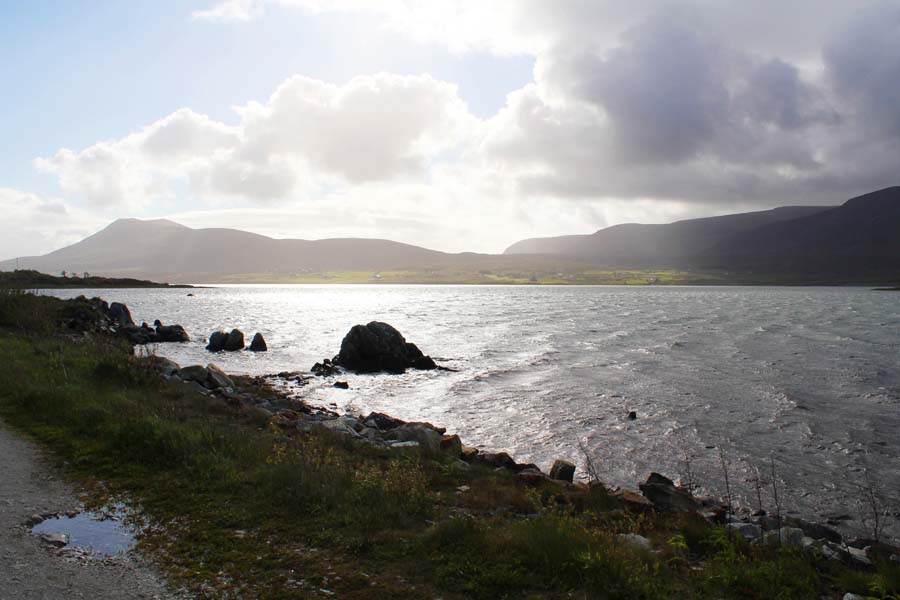 Sure, it’s still Ireland. You drive on the left side, you pay with Euros, people enjoy pubs and bars, and talk about the weather. But while most tourists stumble over each other’s feet in the East und Southwest of Ireland, here, in the barely inhabited rural west, you’ll get a feeling of being far away from all of that. There is no bank, but one (!) ATM at the “entry” of the island. The next biggest town with mundane things like a bank, cinema, and a proper supermarket is Westport, almost one hour away. The small grocery shops and pubs on the island simultaneously act as news and gossip exchange. And sheep are everywhere. I mean everywhere. On hills, streets, and golf courses. Maybe my passion derives from its resemblance to New Zealand? 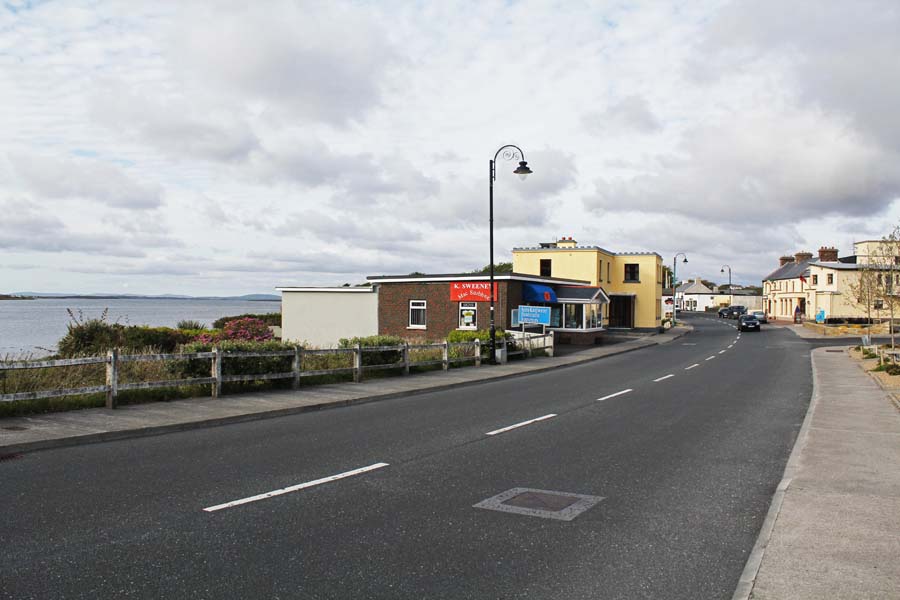 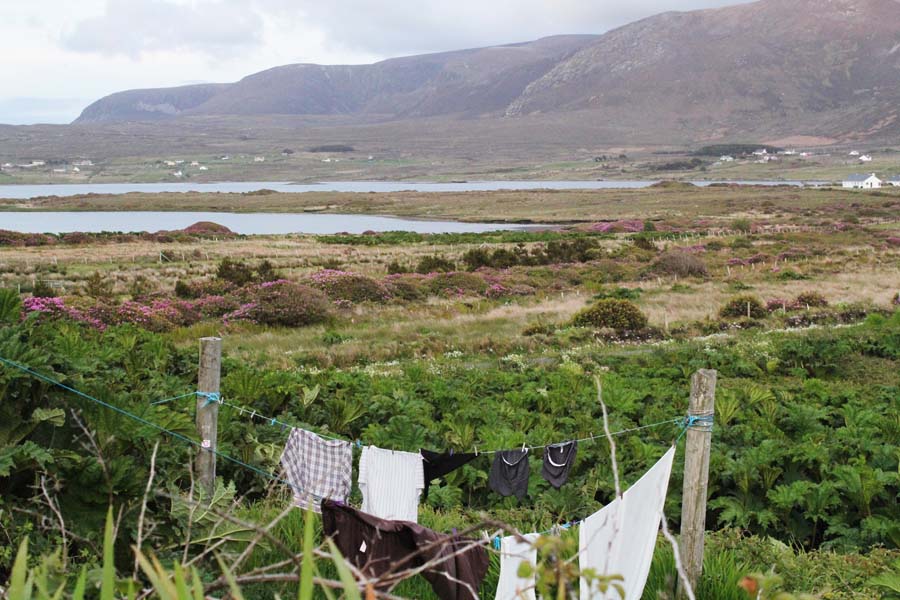 Achill Island has to offer…

About 3.000 inhabitants. With a history of human settlement of at least 5.000 years.

In the summery months, the island wakes of its deep slumber, and the few places to stay are quickly fully booked. Same with all the pubs, of which some then have live music in the evenings.

Plenty of history and mystery. Abandoned villages of 19th century (which Böll writes about in his “Irish diary”). A protestant mission, a defense tower of “pirate queen” Granuaile from 16th century, roots of the Giants including a grave, a history of shark hunting and ship disasters. And traces of the landlord Charles Boycott, whose activities brought the word “to boycott” into the English and German language. 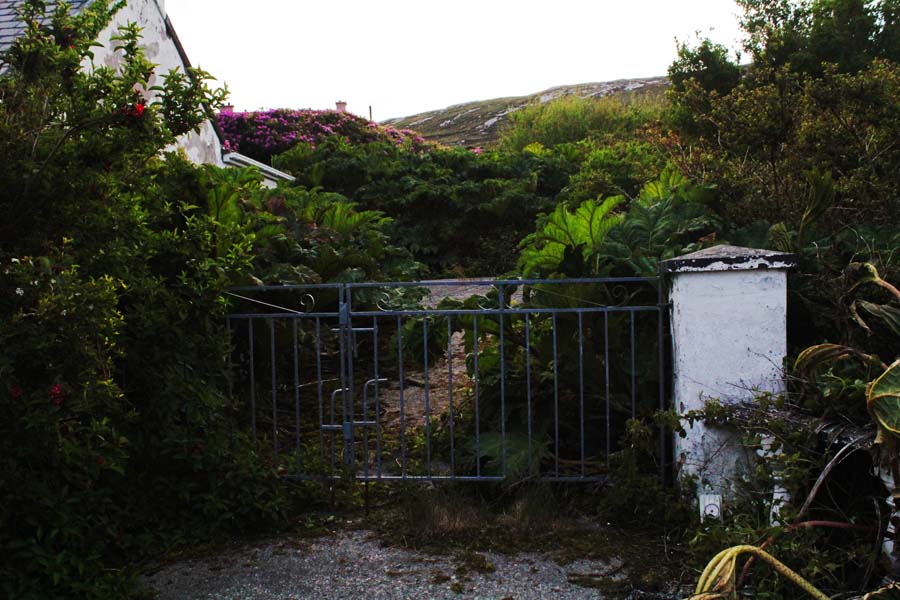 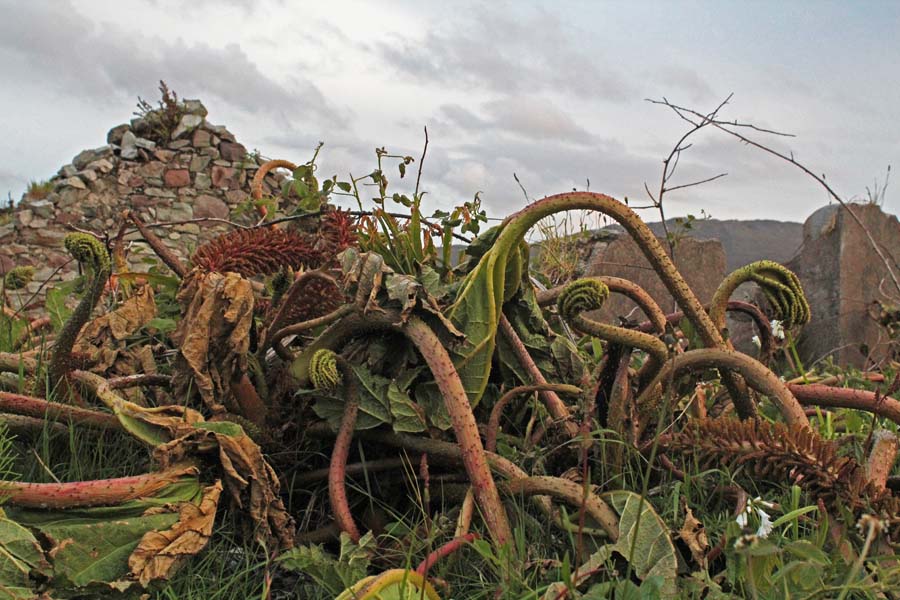 A fulfilled prophecy. In 17th century it was predicted that bodies would be brought to the island on their first and last journey in “fire carts on iron wheels“. That was long before trains had been invented. But as it happened, in 1894, the railway between Westport and Newport was extended to Achill Island, providing a great service and fulfilling the prophecy. The first train on the railway carried the victims of a tragic accident.

You can stay in hotels, B&Bs, apartments, or camping grounds. And activities vary from hiking to horse-riding, golfing, fishing, boat trips, diving, surfing and windsurfing (with or without teachers, gear rental possible) and biking. No need for boredom here. But plenty of space to fool around. 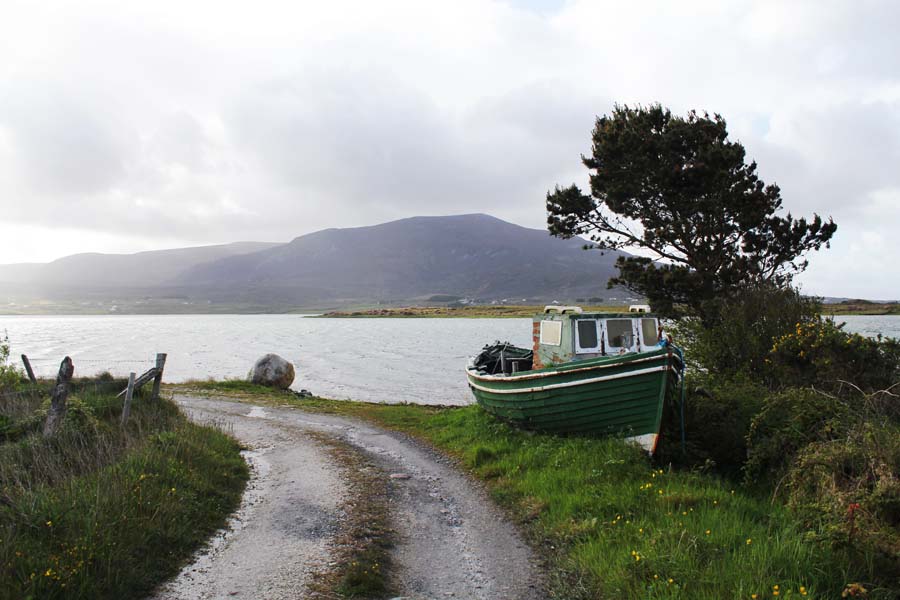 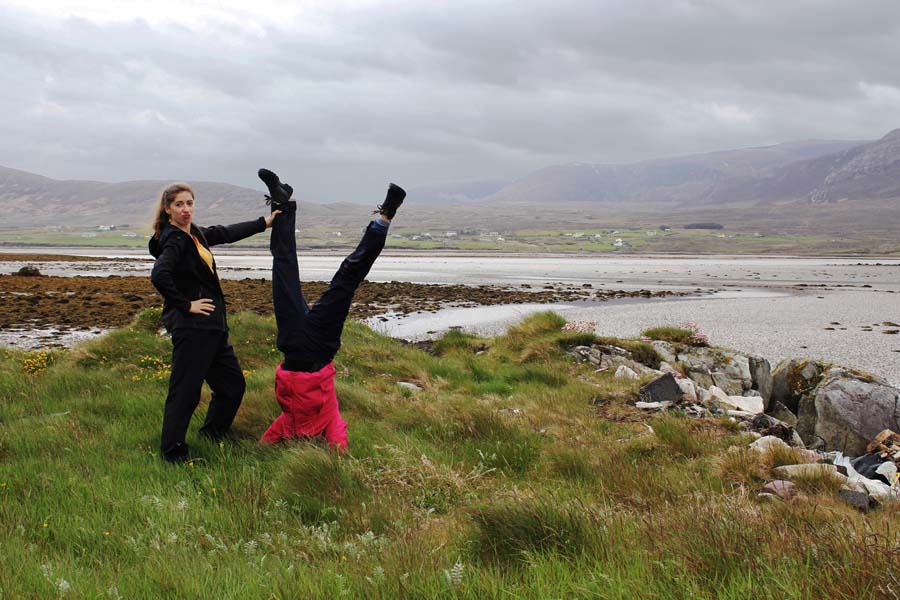 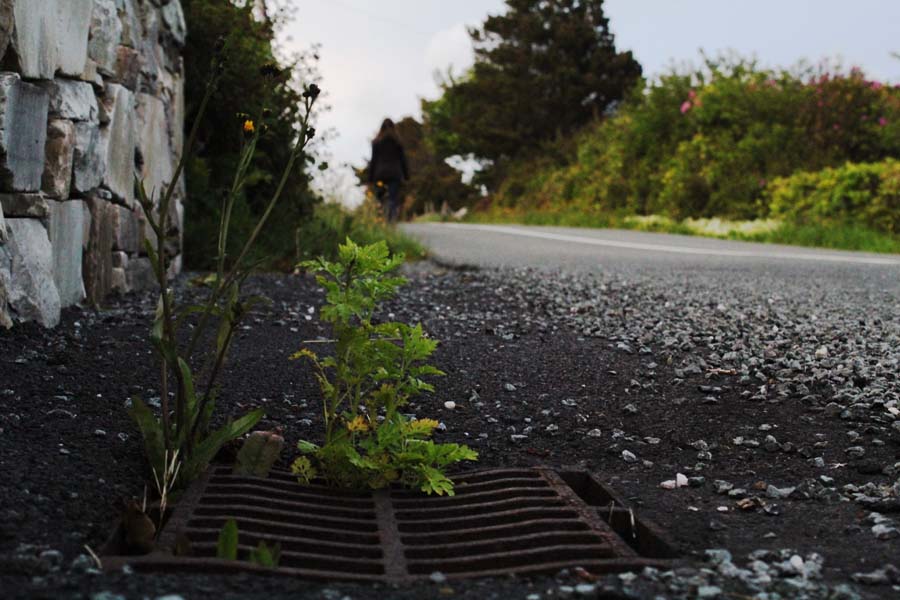 A trip around Achill Island

So, this offer sounds irresistible, right? Well. Rather less so, when it is nonstop raining. But you gotta make the best out of what you get.

For getting around, you might actually wanna take a car to avoid all the complicated facts we were faced with. Like, weekend, a public holiday, no transport on the island. Or hitchhike, which might take some time due to lack of traffic, but getting picked up after all is fairly easy. Luckily, our airbnb host was amazingly friendly and gave us a whole tour around the island, past gigantic cliffs and abandoned villages, long stretches of bold land and rich peninsulas. The rain actually gave the vast green landscapes a fresh look, and beneath our pink umbrella it smelled like summer.

Eventually, he dropped us of at a hike we wanted to do despite the weather (“There’s no bad weather, just bad clothing“), at the opposite end of the island. Our mismatched raincoats and -pants, the orange socks visible at the tops of yellow gumboots, we courageously marched forward into the deserted muddy hills. 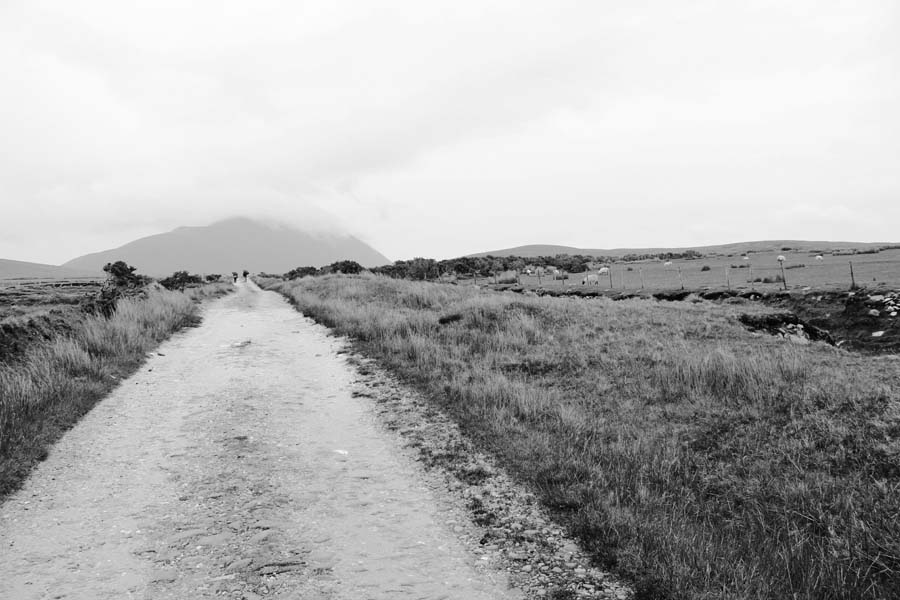 You might be expecting a European Stonehenge version now. Impressive gigantic boulders, creatively put together, forming a mysterious shape, maybe referring to some kind of ancient holy site. Well.

Standing there on a rugged field, we stared disbelievingly on a circle of thirty 4,5 m high concrete blocks. Put up by Joe McNamara in a fly by night fashion.

The message? Our guide shrugged his shoulders. That, the local builder never really confided. Probably some kind of allegory, a symbol for the current state of Ireland, the economical crisis. 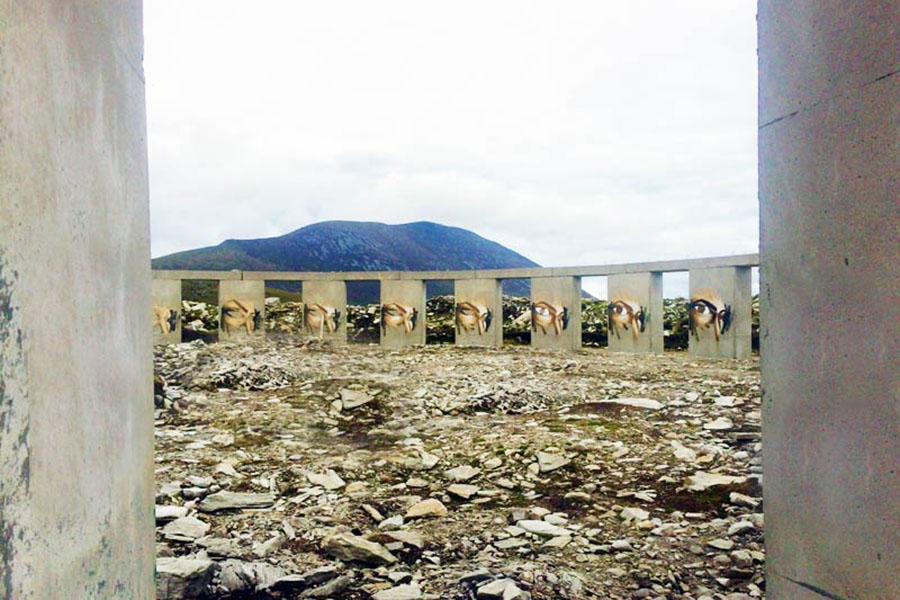 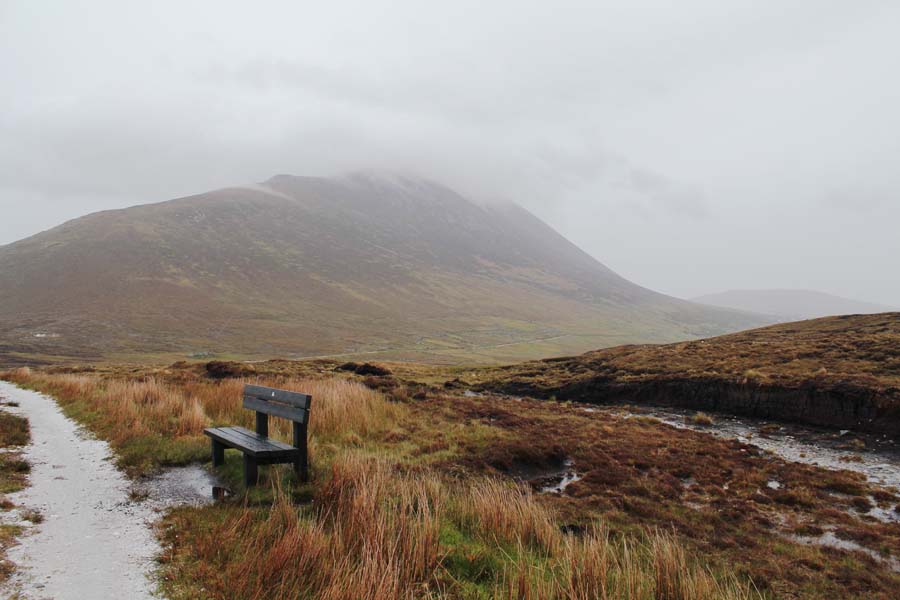 Along our hike near Keel, we came across around 100 old stone cottages separated by tracks and fields for growing crops. It is said to have been inhabited several times throughout history, repeatedly built on top of the last ruins. Lastly occupied in the early 20th century, people used to live in the houses during summer months to be close to their cattle, and return to their villages in winter. In fact, Achill was one of the last European places where this lifestyle has been practiced, with the deserted village being the biggest and best preserved one on the island…

A trip to the Wild 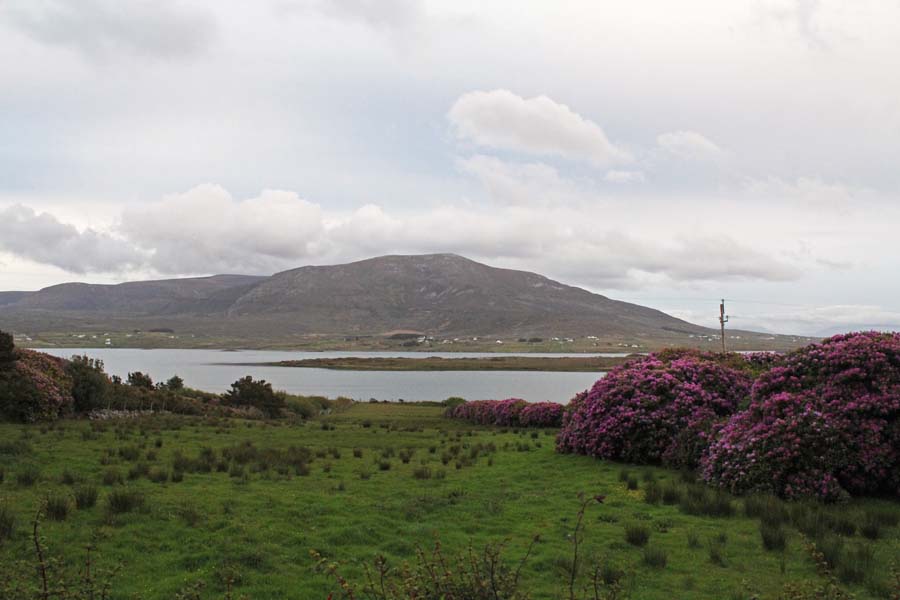 So! Book your flight to Dublin, quickly cross the country and whoosh – you can fully indulge into an Atlantic Ocean sunset. By day throwing your heads in the cool wind, by night letting your fireplace heat you up again, maybe helped by a good glass of hot whiskey in a pub. How does that sound? 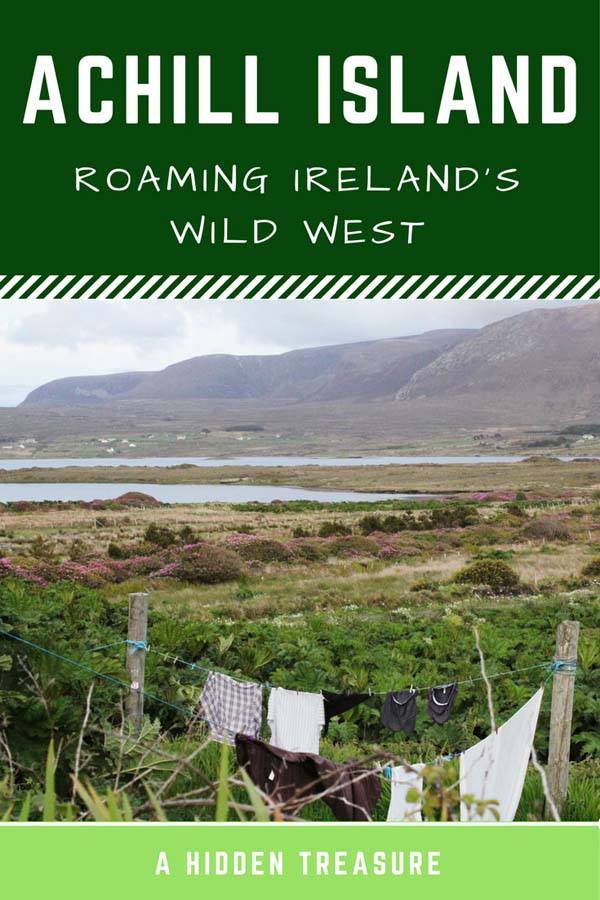 On March 14, 2017 • By Christina
29
Previous Post Foolish
Next Post Why Do We Let Travel and Wellness Become Stress?