I tried to categorize what was lying around me, tried to group all those bits and pieces I for some reason once decided to hang on to. Not a chance. For three hours now I was sitting in my parents’ attic. It was sunny and warm, but the open windows let the air flow freely; air that has stood still for years, heavy with dust and memories.

I sighed and grabbed the next folder, frowning incredulously as I discovered a third grade Math exam. An entrance ticket to a carnival event when I was 15. A piece of New Zealand chocolate wrapping. A studded belt from my rebellious teenage years. My once favorite soft toys. Books, CDs and DVDs en masse. Countless letters from childhood pen pals, love letters from my first boyfriends, poems I wrote and pictures I painted. A pair of jazzy patent leather high heels I only wore once or twice. And, as I moved on to more recent years, many many pieces of decoration; I’ve had an obsession for candles and vintage clocks. Blurry photos that once covered the walls of apartments in Hamburg, Berlin, Frankfurt. The wetsuit I haven’t unpacked since 2014, clothes I could never bring myself to throw out (“you never know, I might really use this when…”), board games, an old stereo.

In short – a lot of nostalgic trash. 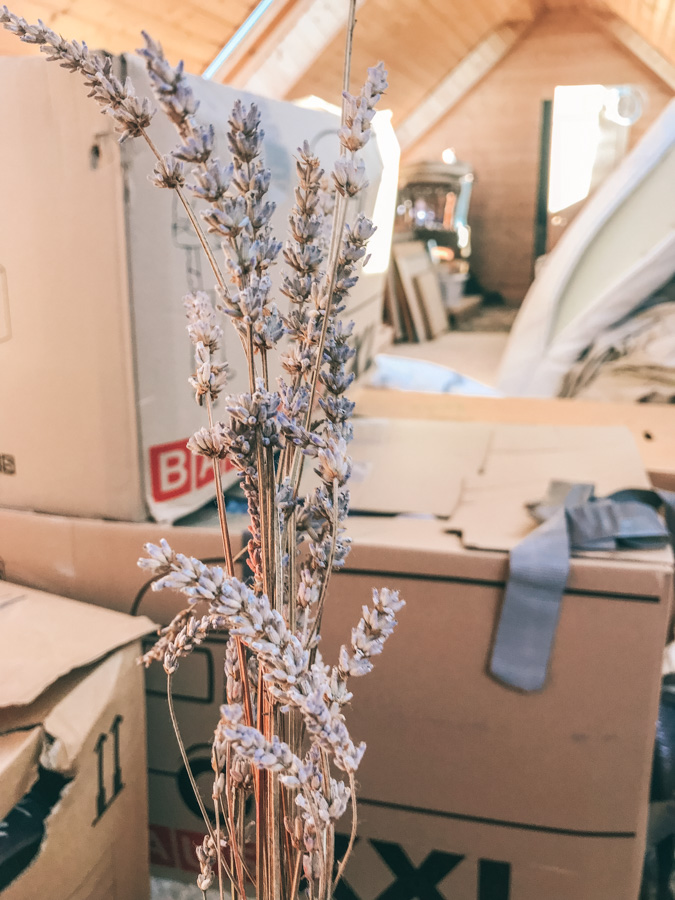 A Paradox of Wealth

I had moved back home temporarily in order to build my van, and wanted to use the time to literally tidy up my life. Considering how often I changed apartments and lived abroad in the last few years, I never got to fully throw anything out… Plus, I intended to top up my budget by selling as much as possible, and so I basically unpacked my entire past.

Why I once had decided to keep all that? It might me somewhat of a family trait, mixed with a societal material emphasis, a personal fear of letting go, and who knows what. I’m not quite sure if my 42 boxes of accumulated stuff are a ridiculous exception, or if more of you experience something similar.

But sitting in this mess I suddenly realized that I didn’t feel comfortable with all this… over abundance.

Quite clearly, I remember a day in Thailand, talking to a girl who was a “digital nomad”, something I had never heard before. She just dropped a sentence about how she sold everything she owned except for what she’s carrying in her backpack, is working online, and not going back home for another year or so – as if it was the most natural thing to do.

But I was mind-blown – and suddenly, my pretty apartment back home just seemed to weigh me down. I felt heavy, and I didn’t know what to do with it. I owned so many things that were supposed to give me a certain status. Yet, I felt inferior to this girl; I guess I was too dependent on this link, between things and status.

Luckily, time does do a good job, for anything. I’ve been full-time traveling and working for almost 2 years now, and naturally a backpack-carrying back is happiest with a lighter backpack. I learned how to get along with only one sweater, I didn’t keep things that were not absolutely useful for the way I traveled and the small and big adventures I encountered along the way. And over time, I cared less and less.

“There are two ways to be rich: One is by acquiring much, and the other is by desiring little.” – Jackie French Koller

The Personality of Things

All this time away from material possessions that used to have their solid spot around me made me pretty much forget them. So it was only upon my return now that I realized how much I had defined myself by how shiny my apartment looked, how pretty my clothes were, how big of a fuck I had given about making this cute-interesting-profound-girl impression.

I had been so insecure about who I was, that I had needed to hold on to something, to physically hold something in my hand so I could project onto it all that I didn’t have within me.

But that’s it. Something is just – some thing. And how can that have any kind of value beyond being a hopefully useful tool?

Yeah, candles are great and I don’t trust people without a good book shelf and you got to feel comfortable and happy in your clothes. And I will of course not throw out my childhood photo album, the ring from my mum, or the tear-moving stories I wrote about the life and death of my pet rabbit when I was 12.

But personally, I decided to enjoy things like these more consciously. I want to abandon the fake promises of wealth they give, because my true wealth derives from within myself, and from within the people I love. 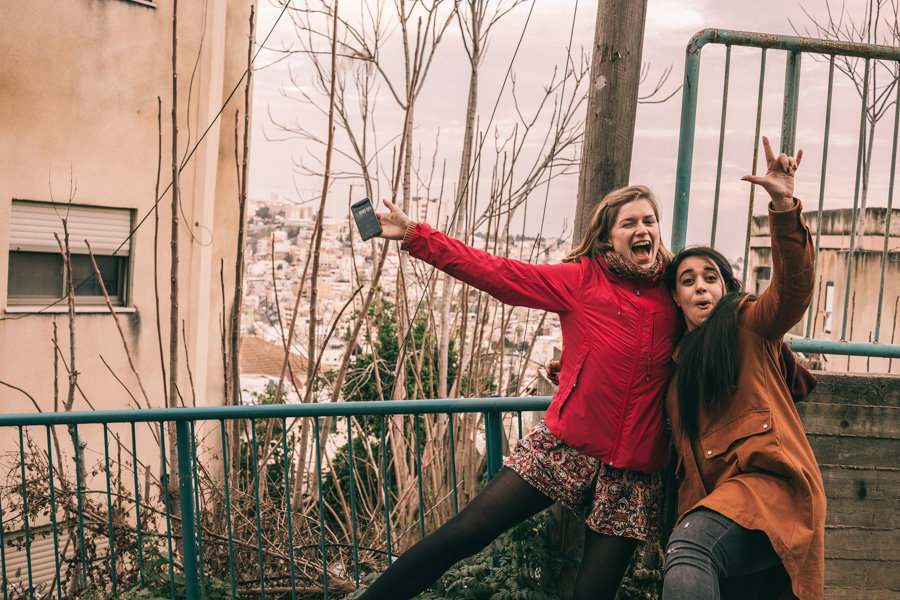 In the day and ages of harddrives easily storing five terabytes, infinite cloud storage, and social media encouraging us to share more and more content of our daily lives, it is not just our basements that go down in clutter. Most photo streams are dominated by low-quality selfies, and the “Documents” folder is flooded with past flight tickets, yet untried recipes, those free e-books you got for a newsletter subscription, and three year old job applications.

Funnily enough, this doesn’t only apply to many personal computers I might have had a look upon, but even companies with data structures as messy as a five year old’s box of crayons, and a multitude of folders named “TO SORT”, dating back to their foundation.

It’s just ridiculously easy to throw “old” files somewhere far away from your desktop so you won’t have to deal with them until the day your computer warns you of only 20 GB disk storage left and you wonder what the heck takes away all that space. Out of sight, out of mind. And Google allowing you to store every single crooked street shot you take doesn’t help either.

I think, this whole process was necessary.

Possibly also of some people. An ex I maybe, that I still held a tiny grudge against, a high school friend with whom I had parted fighting. All this is totally okay, and I want to be mindful about it. Appreciating what was, what I cannot change anyway, and yalla, time to move on and be present. Being grateful for all the wonderful people around me today.

I threw the last couple of folders in one of the many boxes marked “trash”, and carried down those that were intended for the flea market the following week.

Time for one giant coffee.

(that magical machine I will never, never ever let go of) 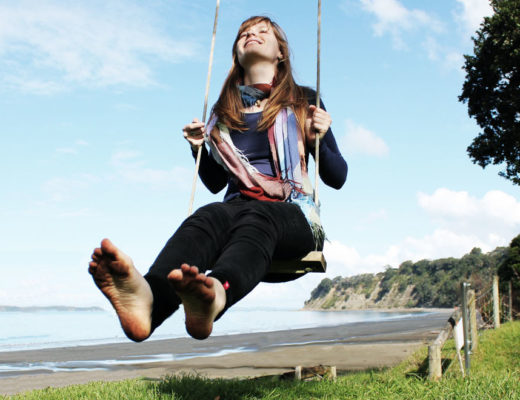 Why You Need To Keep That Spark 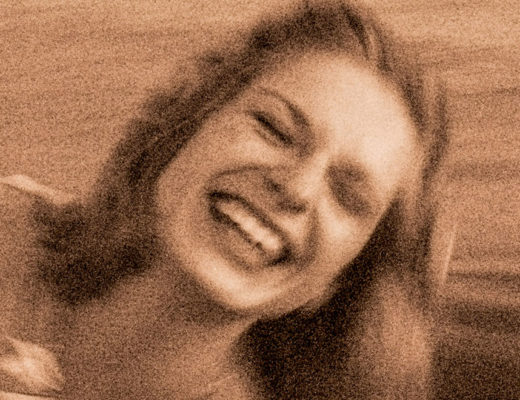 We Were Young And Needed The Happiness 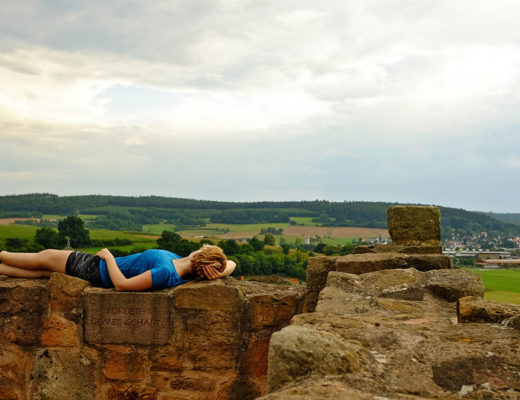 November 18, 2016
Previous Post A Greater Journey - Attending a Funeral in an Indian Ashram